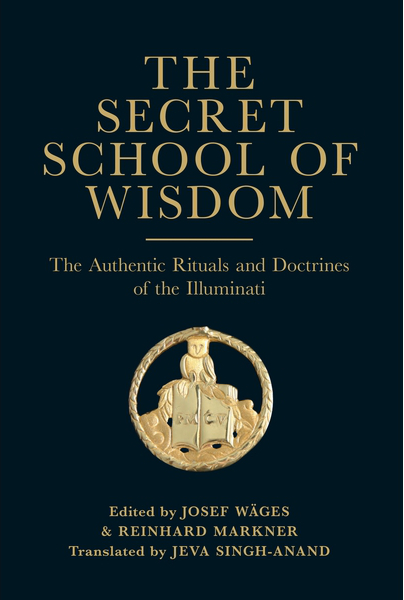 The Secret School of Wisdom - The Authentic Rituals and Doctrines of the Illuminati is a pioneering text, a full working manual of the Order, and an astounding insight into the world's most intriguing secret society.

For more than two hundred years, the world has held a prejudiced view of the Illuminati. Much has been claimed for and against the Order - its name synonymous with secrecy, intrigue, and mystery in the modern context, despite a poverty of concrete evidence in the English language. Little has been said about the factual structure and development through its life cycle. The Secret School of Wisdom - The Authentic Rituals and Doctrines of the Illuminati, is a ground-breaking text. It marks the first time that a comprehensive ritual book for the society has been re-assembled. Every degree, its instruction and associated texts, has been included and assembled in chronological order of progression. The reader is guided along the same path as many of Germany's most enlightened men, as they were in the years immediately prior to the French Revolution.

Much of this material has never been published - let alone translated into English. Supplemental texts are included to gain further historical insight into the Order and all documents have been checked for accuracy with the original archival texts.

"Although some of the rituals and documents have remained available in both libraries and digital archives, no English-language work has succeeded in presenting the magnificent treasure trove of original material as successfully as the book you are now holding in your hands. It is the first work of its kind to offer-for the first time-the full and complete system of the Illuminati under a single cover. Using original source materials, it succeeds in presenting a coherent and intelligible resource to students of Masonic rituals, secret societies, Enlightenment thinking, and little known aspects of world history. You may now read and study the authentic secret rituals and lectures which gave birth to the great conspiracies of today. As preparation of this book progressed I was thrilled to receive each new section, which I hungrily consumed, and compared with documents and manuscripts in my possession. I am happy to report that this book is everything I hoped it would be, and I am likewise happy to commend it to you."

A Note on Sources

Preparatory Essay: A General Idea of the Society of the Illuminati

I. Ritual Book for the Three Symbolic Degrees - Introduction

A) General Constitutional Articles - Introduction, I. Character and Qualities of a True Mason II. Public Conduct, III. Information about Other Institutions

B) Statutes for this Particular Lodge

C) Particular Articles of Instruction - I. Instructions for the Officers Lodge, II. Special Instructions for the Worshipful Masters, III. For the Deputy W. M., IV. For the Senior Warden, V. The Junior Warden, VI. The Secretary, VII. The Treasurer, VIII. The Master of Ceremonies, IX. The Almoner, X. The Housekeeper, XI. The Orator, XII. The Stewards, XIII. The Sick Visitor, XIV. The Decorator, XV. The Librarian, XVI. Information about the Serving Brethren, Addendum A. Report about the State of the Lodge

II. Illuminatus dirigens - Introduction, I. Further Information and General Instructions, II. Instructions Concerning the Lower Classes, III. Instructions Concerning the Freemason Lodge, IV. On the Reception into this Degree, V. Of the Solemn Chapters for Initiation, VI. Opening the Chapter VII. Initiation Ritual, VIII. Closing the Chapter, IX. Of the Love-Feasts or Agapes, X. Ceremonies during the Consecration of a Chapter, Addendum A. Form for the Lodge Constitution, Addendum B. The Prefect’s Order Star, Addendum C. The Knights’ St. Andrew’s Cross, Addendum D. Secret Cipher of the Scottish Knights, Addendum E. Explanation of the Masonic Hieroglyphs, Addendum F. Catechism of the Scottish Knights

I. Lesser Priest Degree. Presbyter - Introduction, Further Information Concerning the Acceptance to this Degree, Ritual for Continued Initiation, Addendum A. Instruction in the First Chamber, Addendum B. Instructions for the First Degree of the Priest Class, Addendum C. On the Initiation of a Decanus